The 74th post from the Journal of American Greatness originally published in April, 2016.

As recently as 2012 Big Data was said to be the ticket to success in presidential elections. Sasha Issenberg’s Victory Lab heralded the role of analytical social science in remaking the presidential campaign. His September 2012 op-ed in the Wall Street Journal welcomed readers “to the modern science of politics, where voters have become lab rats in an ongoing cycle of controlled trials informed by principles from behavioral psychology.” Campaigns, he enthused, “are now awash in data and insights that allow them to act on that data.” Many further reports, including postelection analysis from Issenberg, documented Big Data efforts to study potential voters.

Hacking voters’ brains, as Issenberg called it, was a particular specialty of the Obama campaign. Crucial to this voter-hacking was that the voter-hackers should adopt the affectations of Silicon Valley entrepreneurs, and look somewhat hip but unconcerned, and carry around a MacBook (see Exhibit A below). “Future campaigns ignore the targeting strategy of the Obama campaign of 2012 at their peril,” The New York Times quoted Ken Goldstein as saying.

The “conservative” movement attempted to make quick study, and National Review‘s role in promoting worthless data analytics on the right should not be forgotten. “The task before the GOP now is similar to the one that confronted Democrats a decade ago,” wrote NRO’s media editor in 2014: “to effect a cultural shift within the Republican party, toward what GOP strategist Ruffini calls ‘data-driven decision making’ all the way down the ballot.”

AEI was also quite certain that Big Data would be yuuuuuuuge! “Astronomical feats of data crunching,” Mark Mills wrote in 2012, “are now affordable, enabling new and previously unimaginable services and businesses.” Big Data was Marc Thiessen’s pat explanation of the Romney loss. And AEI has held events on the innovations that could result from applying Big Data techniques in the world of federal statistics.

Meanwhile, Donald Trump had trademarked the slogan “Make America Great Again” in November 2012, without a Republican consultant, National Review writer or data analyst anywhere nearby. While the helpless political science profession writes grant proposals for research in Trump Studies, you can read our results right now. (They’re reading us, too.)

The failure of the Romney campaign’s polling-place analytics was supposed to be motivation for better “investment” in data analytics by Republican campaigns in the future. In the immediate wake of Obama’s 2012 victory, only skeptical leftish essayists warned us to “Beware the Smart Campaign.” “You should be worried,” wrote Zeynep Tufecki, “even if your candidate is—for the moment—better at these methods. Democracy should not just be about how to persuade people to vote for one candidate over another by any means necessary.” 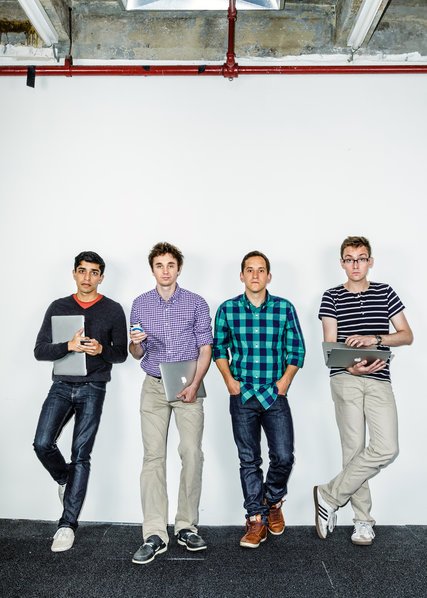 Exhibit A. Advanced data analytics and tactics team BECAUSE SCIENCE!, Obama Campaign, circa 2012.

IN THE CURRENT CYCLE, Ted Cruz’s now-finished campaign spent on invested in Big Data analysis most of all (see Exhibit B). The campaign gave voters and potential volunteers different classifications, from “relaxed leader” to “temperamental conservative” and (eerily) “true believer.” The Washington Post even implausibly suggested that Cruz’s efforts were somehow retro, “a multimillion-dollar bet that such efforts still matter in an age of pop-culture personalities and ­social-media messaging.” A funny thing to say, since microtargeting was at the heart of Facebook-centric “social-media messaging.”

Cruz’s shamelessness in using Big Data extended all the way to his use of the clergy, a fact tending to confirm John Boehner’s judgment on the inner core of the Cruz phenomenon now past. “The campaign’s personality and issues data,” WaPo noted, “was used to determine which pastors to contact for recruitment as county ‘pastor chairs’ for Cruz.”

Exhibit B. Senator Ted Cruz surveys a large data set during his successful 2016 campaign to pimp the GOP Establishment.

After Cruz’s success in Iowa, some Big Data apologists attempted to call the defeat of Trump on the spot. Cruz had slithered his tongue in just the right way for each voter whose ear he had, while Trump had pitched his message to a multitude that did not exist. Trump’s ability to speak his mind to a large number of voters, rather than pretending to be something different to each, was suddenly proof of his evil.

Eliana Johnson, National Review‘s Big Data cheerleader, was right on cue with her endorsement of Cruz’s data savvy—further evidence of his strength in the general election. Eliana, who graduated from NR media editor to Washington editor since her earlier article, breathlessly reported that “statistical awareness permeates the culture of the [Cruz] operation from the candidate to his most junior aides.” And NR devoted an entire article of hers in summer 2015 to Cruz’s statistical prowess.

The campaign with “perhaps the most advanced, or at least the most ambitious” Big Data analysis has now flopped.

TRUMP’S USE OF THE SOCIAL MEDIA has played a role in his success, but not in the way most writers have suggested. The thinkpiece industry is incapable of identifying any political factors behind Trump’s rise. “The only thing that’s really changed between Trump’s other attempts to run for office and now,” says Vanity Fair, “is the advent of social media.” Never mind that the real actors in the social media world are the media companies themselves. Facebook’s laughable denials that it would ever, ever, no never ever seek to influence the 2016 election are contradicted even by The Atlantic.

Since Facebook’s analytical tools won’t be enough to tilt the election, Mark Zuckerberg’s only hope is to use his own media platform as a vehicle for his own anti-Trump campaign. But since the platform he is using was built to negate political action by neutralizing it through the social medium, he cannot win. He cannot be a political actor.

Meanwhile, an early examination of Trump’s website showed that it did not even have the simplest data-collection tools built into it.

Though Jonah Goldberg did throw cold water on the Big Data push, mainstream conservatives’ opposition to Trump is at odds with any doubts they might express about the use of analytics in presidential campaigns. If they conclude that analytics, microtargeting and narrowcasting are corrupting political rhetoric (which they are), then Trump is the only alternative.

Trump’s ability to halt the triumphant conquest of data also shows the particular accomplishments of Trump as a political personalityand separate from the phenomenon of Trumpism. No other candidate expressing the Agenda of American Greatness has sufficient established celebrity to parlay into the bold restoration of American political rhetoric (see Exhibit C) based on immediate personal judgment—a Trumpian accomplishment that JAG will examine later in this series.

Trump disregarded data analytics because he knew that his views genuinely represented what the silent American majority were thinking all along. His instinctive knowledge of the real though often neutralized American polity was the basis of his confidence in ignoring what poorly framed surveys claimed to reveal about the temperament of particular voters.

Trumpian data science exists in spite of the contrasts we’ve outlined between Trump’s approach and the approach Big Data facilitates. The campaign has begun a limited use of data analysis in some circumstances. “The data push,” Politico reported in January, “is focused on integrating information Trump has collected, through his campaign website and at voter rallies, on nontraditional or unregistered supporters.” The campaign’s emphasis on “nontraditional or unregistered supporters” does not serve the same antipolitical end served by Big Data analysis more generally. The core Trumpian message already resonates with those who aren’t surveyed by the usual means. Rather than seeking to neutralize political participants through microanalysis and manipulation of their preferences, Trumpian data analysis simply identifies those who are receptive to Trump’s public, personal political message.

IN ITS DAY, BIG DATA WAS an enemy of political judgment. By taking preference-modeling as its goal it framed politics in terms of economics. It drew the categories of its preference-modeling from psychological science, whose main accomplishment in the past year has been to reveal most of its studies as entirely baseless. Psychologists have no way of including “patriotism” as a term in their analyses, patriotism being a value-laden term. It’s safe to say that “American greatness” was never included either as a motivating independent variable in explaining voter action, nor as a dependent variable in any analysis of the outcomes produced by the American political system.

Because Big Data in politics attempts to psychologize political judgment, it works only to the extent that politics is absent. It is an extension of the managerial science this Journal opposes. And Donald Trump has brought about its demise.

The failure of Big Data proves the existence of the national political phenomenon to which Trump appeals. No politician following the cues of the data sets would have attempted the appeal which Trump decided on in the darkest days of 2012. It required a statesman who knew that the basis of real political deeds, even in 2016, lay in love of real community.

Presented with the option to side with real political rhetoric or leave it for the restoration of data science, conservative leaders have chosen the latter. Those who claim to sympathize with Trumpism but reject its current vehicle are choosing the latter, as well. The opportunity to speak about what matters is now or never.

There, political scientists. A few theses for your grant proposals. Don’t forget to cut us a check. We’ll be too busy paying attention to politics to find out who owes us for their ideas.

1 thought on “Trumpian Accomplishments, Part I: The End of Big Data”